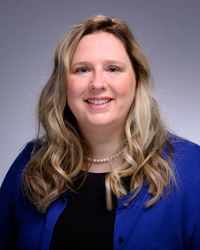 Ms. Kennedy is the Litigation & Records Legal Professional for the Office of General Counsel. Among other things, her responsibilities include Litigation support in implementing and managing the e-discovery process, performing investigations, gathering documentation and drafting discovery responses.  She also processes all records requests including third party subpoenas, FERPA requests and expungements.  Additionally, Ms. Kennedy assists with a large number of office wide projects and training preparations.

Prior to these duties, Ms. Kennedy served as the Officer Assistant to the Vice President & General Counsel.  She began her career at Travelers Indemnity Company in Baltimore, Maryland where she managed third party toxic tort litigation.  In that role, she determined Travelers’ legal obligation to policyholders and negotiated tactical settlements by providing coverage analysis, investigating claims and reviewing legal documents.

In 2022, Ms. Kennedy graduated from Loyola University Chicago School of Law.  She is  also a Double Domer having graduated from Notre Dame in 2004 and received her Master of Business Administration from the University in 2010.